During the early part of the seventeenth century, Galileo examined the concept of acceleration and free falling bodies; however, he was limited by his timing device.  So, Galileo slowed down “gravity” by using an incline plane to measure “falling bodies”.  Southport High School AP Physics C students performed Galileo’s Incline Plane Experiment in the physics lab by experimentally measuring the acceleration of a cart rolling down an incline at different angles of the ramp.  After collecting and analyzing their data, students compared their Galileo value of gravity with the accepted value of gravity, 9.81 m/s^2.  Galileo and the AP students were successful in their investigation! 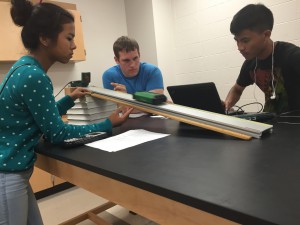