A Perry Township freshman is being honored as one of only ten students in the country to win the prestigious Arthur Ashe Essay award. Southport High School freshman Colston Streit was featured Thursday August 27th on WRTV 6 News at 5:30 with reporter Lauren Casey who interviewed Colston at the High School Thursday morning. Here’s a link to that story.

Colston says he’s honored to be one of only a handful of students in the country to win the Arthur Ashe Essay Award. It’s sponsored by the National Junior Tennis and Learning Organization (NJTL) and the United States Tennis Association  (USTA).  His essay was chosen out of 5,000 essay entries from across the nation.  As a result, he will be in New York City this weekend being honored for his achievement.  His family will fly out Friday morning and return Tuesday afternoon.  Colston will be participating in Arthur Ashe Kids’ Day and various clinics.  He currently is alternately playing #1 singles and #1 doubles for the Southport High School boys’ tennis team, so you can imagine his excitement to be playing on those courts in New York. Colston and his family are also being sent to see “Wicked” on Broadway plus they will attend concerts on the grounds.  Monday they will be guest’s at the start of the US Open.  Congratulations! 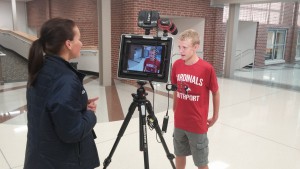 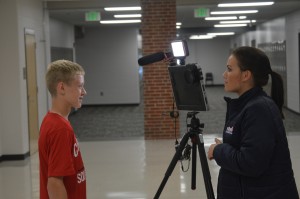