Last weekend, Cyber Blue traveled to North Carolina to compete in their first competition of the 2016 season, playing the new challenge “Stronghold”.

Cyber Blue joined 29 other teams at this event.

After qualification matches, the team was ranked 5th with a record of 8-4. Cyber Blue obtained the highest Offensive Power Rating and had the highest Autonomous score at the event.  The team was captain of Alliance 5, and lost in the first round of eliminations to the event winning alliance.  The team was recognized by the judges with the “Engineering Excellence” award for the robot design and implementation.

This was a good event for Cyber Blue, with the team learning more about the details of game play and the impact of the obstacles of the game field on the robot. Several areas for improvement with the robot have been identified and the team will spend the next two weeks making adjustments and modifications to so they are ready to compete again.

The team traveled out of Indiana to provide a strong practice event before beginning official Indiana events.  Cyber Blue’s official Indiana District competition season begins March 19, at Warren Central. The team will compete at Warren and then at Perry Meridian (March 25-26) as they work to qualify for the Indiana Championship event. 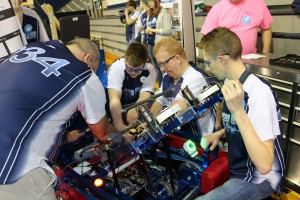 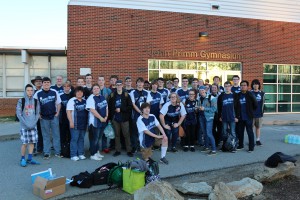