Under the leadership of Mr. Patrick Blakley and Mr. Scott Miller, Homecroft Elementary’s Project Perfect Gentlemen recently celebrated the end of the school year with their annual “Gentlemen’s Dinner” at the Columbia Club on Monument Circle.  These young men had the opportunity to display their etiquette training, ability to tie a necktie, and social skills while immersing themselves in the history and fine dining of this elite Indiana landmark.  After dinner, the members of Project PG were given a tour of the Columbia Club that included access to its beautiful ballroom, Presidential suites where several former U.S. Presidents have stayed, and the opportunity to sit in its private meeting room where Indianapolis Colts’ Peyton Manning and Andrew Luck signed their first contracts with the team. 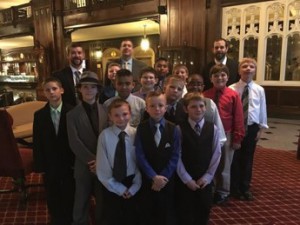