Salutatorian, Michelle Frustero earned a 4.5417 GPA. Her passion for math and a strong desire to hone her skills were her strongest motivators. She attributes her academic success to work and a dedication to this skill, and this year, specifically, to the memory of her late mother. Frustero is intensively involved in World Languages Club and Book Club. In the fall, Frustero will attend the University of Indianapolis to major in Secondary Education, to pursue her dream of becoming a math teacher or professor. In an ideal future, she would like to teach calculus, one of her favorite subjects. “I’ve had lots of experience helping my friends with math, and I found that I love to see their glow of understanding once I answer a question. I enjoy being helpful.”

Frustero emphasized the importance of taking risks in high school, and that underclassmen should not be afraid to solidify their knowledge. “The biggest things you can do are so much more than what you would initially believe or anticipate. Don’t settle. Try the harder stuff from time to time; they usually don’t bite. You’ll probably surprise yourself, as I did.” 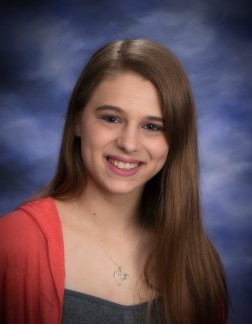 Michelle Frustereo is humble yet determined. She strives for the best, and things come naturally to her. She has accomplished many things, much to her surprise, such as making A honor roll every semester and eventually the title of Salutatorian. She has participated in Book Club and World Language Club and has become one of the board members of WLC. She has helped out with many activities, such as making banners for the clubs and integrating French culture into WLC. Even after her mother’s death early senior year, she was able to persevere in her hard work.

Perry, especially the teachers, have provided sound advice and support in her times of need. They have been reassuring guides for the path that she has taken. She plans to attend the University of Indianapolis in the fall, with intentions to pursue Secondary Mathematics Teaching as her major.