Congratulations to members of Perry Meridian’s Brain Game team. They competed this week beating Guerin Catholic in the first round of the annual tournament. They lost to defending champions, North Central, in the second round in a very close match. You can watch it on WTHR Channel 13 on January 2nd at 7:00 PM. 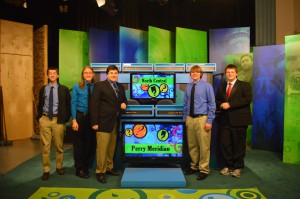