Posted on November 9th, 2015 in Featured, General News
Former Southport Middle and Southport High School Spanish student Emma Hughes is pictured here with State Superintendent of Public Instruction, Glenda Ritz.  Emma is now a Junior at Indiana University.  She lived in Valencia, Spain on the IU Honors Abroad Program in Foreign Languages  after her Junior year at Southport.  She spent the entire academic year in Spain last year and has received numerous honors for her language skills. This photo was taken Saturday at the IFLTA language conference held at the Sheraton at Keystone at the Crossing.  Emma was also selected as one of the top college Spanish students in the state of Indiana by the Indiana Chapter of the American Association of Teachers of Spanish and Portuguese(AATSP). 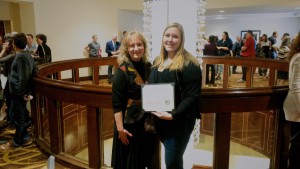