Students Get Packet From The White House

After hosting a first ever Town Hall meeting in October Mr. Griffins Government and US History students at Perry Meridian have received a packet of items from The White House. The large envelope arrived earlier this week to the surprise of the teacher and his students.  There were pictures of the President, The First Family even pictures of the family dogs. There was also a card from President Obama thanking Mr. Griffin for his efforts as a teacher.

The students pulled off an impressive government Town Hall Meeting October 8th which featured several elected officials. It was even covered by the news media. Mr. Griffin’s special needs students sent hand-written letters to the White House but they weren’t sure what to expect. Now they know. Mr. Griffin says the idea was born out of a Performance Based Learning session with students wanting to find out how to create a voter registration drive so that young citizens become more involved in the political process. To see more pictures of the items just long onto the Perry Township Schools Facebook page. 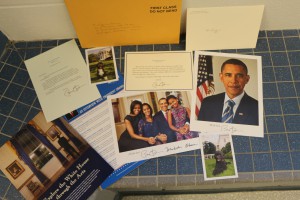