Taylor To Play Division I Volleyball at Eastern Michigan

Riley has been a dedicated starter for three years on the volleyball team.  The improvements she’s made as a player over the past three years have been noticed and complimented by many opposing players and coaches. Riley led the volleyball team to the 3rd consecutive sectional title in a 5 game thriller over Roncalli and a 5 game classic match with Avon in the Regional.  Riley will attend Eastern Michigan University in the fall of 2016 to play collegiate volleyball. Congratulations Riley! 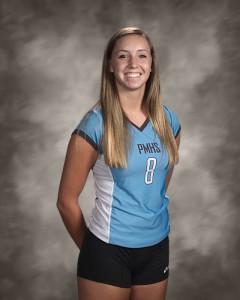