Posted on January 26th, 2016 in Featured, Uncategorized
This past weekend, the VEX Division of the CyberCards competed in the Indianapolis VEX Robotics Championship.  This two-day event, in halls A, B, and C of the Convention Center, featured 60 teams in our division and another 120 middle and elementary teams.  The team’s qualification record was 5-2, good for a 13th place rank. The team was selected to join the seventh alliance, and fell in quarterfinals to the alliance that won the event.  This was a great start to our 2016 campaign, and we’ll be sure to build on this success.
Some fun facts about the CyberCards’ effect on this event:
Stu Bloom was the head referee.  The first event he ever head reffed was the 2008 CAGE Match at Southport High School.
Samir Shaikh was one of the event emcees.  The first event he ever emceed was the 2009 CAGE Match at Southport High School.
Corey Donovan and his wife ran the Stephen Foster Elementary (School 67) team.  Corey is a 2009 CyberCard alum.
(Former) Mayor Greg Ballard is the driving force behind the event and its funding.  The first robotics event he ever attended was the 2008 CAGE Match at Southport High School, when he famously said, “This is incredible.  We need one of these teams in every school.” 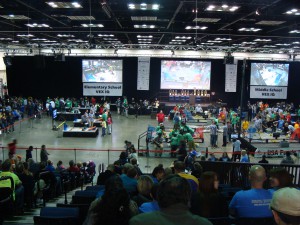 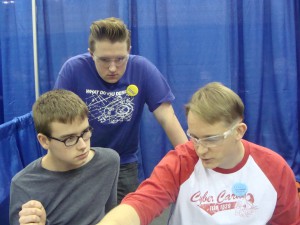