Coach Stevenson passed along a few interesting stats. “We averaged 46.6 ppg, and our defense only allowed 8.2 ppg.  We rushed for over 3000 yards, scoring 40 TDs on the ground — with 2 players getting over 1000 yards on the season.  Most of the coaching staff was fortunate to have the same players three years in a row. They’re a great group of kids!”, said Stevenson. For more photos following Saturday’s game log onto the district Facebook page. 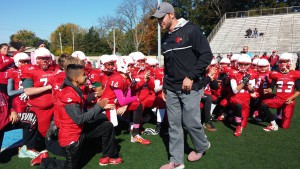