Students in Mr. Tim Griffin’s class at Perry Meridian High School are preparing for a Town Hall Meeting they are organizing themselves. Students sent out hand-written letters to several politicians, in the area, ten of whom have responded and will be part of the first of its kind event Thursday October 8th, from 11-to-1, in the PMHS Auditorium. The young people came up with the idea when talking about voter registration in class. The unique idea has even caught the interest of the television media. PMHS Student, Emilio DeJesus is seen in this photo doing an interview with WRTV 6 News reporter Lauren Casey. The story will air the evening of the event. 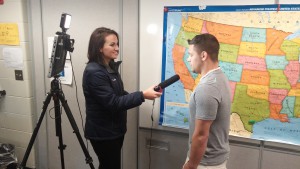